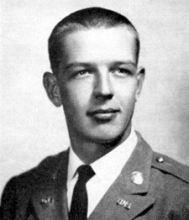 He was born February 8, 1926, in Madison, W.Va., the son of the late Harry G. and Brookie Turley Shaffer. In addition to his parents, he was preceded in death by the love of his life, his wife of 67 years, Mary Lee Kenney Shaffer. Gus and Mary Lee were married on August 20, 1949, and their loving devotion to each other is an example to all who knew them. Throughout their marriage, they were each other's favorite companions. He was also preceded in death by his sisters, Catherine Blair, Jane Johnson, and Margaret Frobase; and his brother, Winfield T. Shaffer; as well as an infant granddaughter, Margaret Palmer Shaffer.

Gus attended Scott High School and Greenbrier Military Academy and served in the Army Air Corps prior to enrolling at West Virginia University, where he was a member of Beta Theta Pi fraternity and Mountain Honorary. He supported the Scouts for many years, earning his Eagle Scout as a youth and the Silver Beaver award as an adult. He graduated from the West Virginia University College of Law in 1950 and joined his father in the law firm, Shaffer & Shaffer, PLLC, where he practiced for the duration of his distinguished legal, business, and civic career. He was the mayor of Madison for 16 years, past president of the Madison Rotary Club, long-time Chairman of Boone National Bank, past president of the West Virginia State Bar, and a member of the American College of Trial Lawyers.
His many and varied interests are a reflection of his love of life, but his true passion was in serving Christ through service to others. He was a long-time member of Madison Baptist Church where he served in various leadership roles, but most importantly as a Sunday School teacher. Most recently, Gus and Mary Lee were members of the United Methodist Temple in Beckley, W.Va. He was certified by Stephen Ministries and provided one on one care to those who were hurting and struggling in life. He was a member of Gideons International, and Gus and Mary Lee travelled the entire country as active members of Habitat for Humanity.

Gus is survived by two daughters, Susan (Tom) Gilpin, of Huntington, W.Va., and Ann (Jim) Bunch, of Houston, Texas; and a son, Harry G. "Chip" Shaffer, III (Sarah) of Madison, W.Va. He was the beloved "Pop" to eight grandchildren and seven great-grandchildren: Jacob Bunch (April) of Houston, Texas, and their son Jackson; David Bunch (Shannon) of Chapel Hill, N.C., and their daughters, Sophia and Lilly; Katherine Gilpin Skahen (Martin) of Syracuse, N.Y., and their children Caroline and Charles; Andrew Gilpin (Allison Bean) of New York, N.Y.; Ann Gilpin Lentell (Ryan) of Natick, Mass., and their sons Thomas and James; Harry G. "Gus" Shaffer, IV, of Morgantown, W.Va.; Carl Shaffer (Lauren Gerchufsky) of Charleston, W.Va.; and William Palmer Shaffer, of Knoxville, Tenn.; as well as many nieces, nephews, extended family members, and friends who love and admire him.
His family wishes to acknowledge and thank Pam Sadzewicz who provided loving care to Mary Lee and Gus for many years and also the many caregivers including those of Hospice in his final days.

The family will receive friends and family beginning at 10 a.m., on Wednesday, March 13, in the sanctuary of the Madison Baptist Church, 426 Second Street, Madison, W.Va. The funeral service will begin at 11:30 a.m., after the visitation, on Wednesday, at the church, with the Rev. Jim Butcher officiating.
Burial will follow at Boone Memorial Park in Madison. Handley Funeral Home in Danville is assisting the family. In thanksgiving for Gus's life and generous spirit, in lieu of flowers the family invites memorial contributions to the Shaffer Family Fund at the Boone County Community Foundation, P.O. Box 38, Madison, WV 25130.