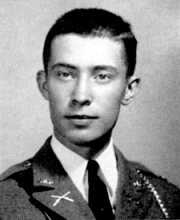 Edgar Allen Fleetwood, Jr.—known to his GMS friends as “Fleety— passed away peacefully in CharloBe, N.C. on September 24, 2019 from natural causes. He was 93.

Edgar was born on June 27, 1926, in Clarksburg, WV to Edgar Allen Fleetwood, Sr. and Fannie Harrison Fleetwood. After gradua›ng from Greenbriar Military School in 1944, Edgar aBended Duke University for a few months un›l he enlisted in the U.S. Army Air Force. He completed his training at Camp ABerbury in Indiana and was assigned to the 1537th AAF BU, serving in the Pacific Theater as a radio operator and gunner on the B-17 Flying Fortress. He was sta›oned in Okinawa and the Japanese mainland.

Edgar logged many flights and was considered a very proficient radio operator. His most memorable missions were between Japan and the Philippines under the command of General Douglas McArthur. When he finished his service in 1946, Edgar, then a sergeant, returned to Duke University where he earned his degree in Chemical Engineering. After gradua›on he returned to his family home in West Virginia and con›nued his post-graduate educa›on at West Virginia Wesleyan University.

In 1950, “Fleety” met his soulmate, Shirley Jean Hunt at the Candy Kitchen in Weston, West Virginia, his mother’s hometown. They were married in 1951 at St. Patricks Church in Weston—a marriage that lasted almost 70 years! Edgar and Shirley had two children, Nancy Jean Fleetwood and Edgar Allen Fleetwood III.

Edgar’s career in chemical engineering opened challenging opportuni›es throughout the Southeast. He left Weston and joined the Celanese Corpora›on in Pearisburg, WV for several years and then was transferred to another Celanese plant in Rock Hill, SC, as Director of quality control. From there he joined a division of Dow Chemical Corpora›on, Dow Badische, in Williamsburg, VA. Having gained extensive experience in major U.S. manufacturing plants, Edgar was recruited by Voigt-England Chemical Company to broker large equipment contracts represen›ng European and U.S. manufacturers throughout the U.S. and Canada. He served as Vice President and in 1975 established his office in CharloBe, NC.

When he turned 65, Edgar “tried to re›re” but his re›rement only lasted a few months—a new challenge was on the horizon. As a veteran and a businessman, Edgar was approached to join the U.S. Small Business Administra›on in CharloBe as the Veterans Affairs Officer. For the next 20 years, Edgar worked with veterans who were leaving military service in North and South Carolina to help them establish small businesses. He loved his work with all of the vets and was credited with assis›ng many new careers for his fellow comrades. At 85 years old, Edgar re›red and was honored by the U.S. Small Business Administrator for his outstanding service.

Edgar and his wife Shirley were very involved in the Arts in CharloBe—they were regular leaders in the Carolina Opera Guild, the CharloBe Symphony and the Mint Museum. Edgar was a well-read historian of the U.S. involvement in wars both home and abroad. Throughout his life, Edgar loved listening and dancing to the Big Band sounds that he and his pals shared at GMS. He loved fishing and taking his children boa›ng and water skiing. Known as “Daddy Ed” to his grandchildren and 5 great-grandsons, they had so much fun exchanging an›cs and silly faces fueled by Daddy Ed’s contagious laughter.
His days at Greenbrier Military School were very special to Edgar. These guys became his most cherished life›me friends and he loved aBending reunions later in his life. He was so proud of his service in World War II and was a loyal contributor to the WWII memorial in Washington, D.C. He lost several GMS
classmates in World War II. “Fleety” was always a bit “misty” when he visited the memorial or regaled his family with stories of his high school adventures at Greenbrier.

Edgar passed away on September 24th, just a liBle over a month after his beloved wife, Shirley. His memorial service was held at Christ Episcopal Church in CharloBe, N.C.—a tribute to his incredible life and service to his beloved country.

Edgar will be buried with Military Honors at 3:00 p.m. on Friday, July 17, 2020, in Arlington Na›onal Cemetery, Arlington, Virginia. His wife Shirley Hunt Fleetwood will also be buried with him.