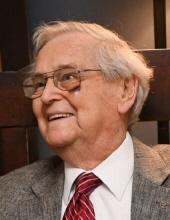 Bill attended Greenbrier Military School, attended Ohio Wesleyan College and graduated from Cincinnati College of Mortuary Science and was Past President of the West Virginia Funeral Directors Association. He was a World War II Navy Veteran and member of the American Legion Post #26. Bill was owner of Wallace & Wallace Funeral Homes, Trustee of Wallace Memorial Cemetery, member of Ronceverte Presbyterian Church where he was a past Deacon, Elder and Trustee. He was a past member of Ronceverte City Council. Bill was a founding member of the Greenbrier County Emergency Ambulance Service, past member of the Ronceverte Lions Club and Shyrock Masonic Lodge.

Other than his parents he was preceded in death by his great grandson Odin Arnold; sister Norma Lemon; brothers Robert L. Wallace and Jack K. Wallace.

Bill’s funeral service will be Thursday February 3, 2022 at 2:00 PM at the Ronceverte Presbyterian Church with Rev. Stephen Baldwin and Rev. Greg Scott officiating, interment will follow at The End Of The Trail Cemetery in Clintonville.