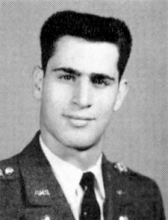 Enrico “Rocco/Rico” Benigno, 80, passed away on March 7, 2021. He was born in Manhattan, NY and lived in Brooklyn, NY before moving to Garfield, NJ where he remained. He graduated from Garfield High School in 1958. He also was an alumni of Greenbriar Military School, graduating in 1959. He then attended Montana State University where he played football. He also had his Real Estate license. Before retiring, Rico worked in various positions in the concrete industry for many years in both New York and New Jersey. He then worked for the Garfield School District as a Security Guard and retired in 2014. He loved his fish pond and enjoyed scuba diving on his many vacations with his wife. He also enjoyed spending time with his two beloved pet cats. Predeceased by his parents Edward I. and Mary Benigno, and a brother Edward Benigno, Jr. Beloved husband of Andrea Benigno (nee Stanish). Devoted loving father of Ashley Grey Bennington. Dear brother of Sal Benigno and Joanne Chinelly (nee Benigno). He was a loving uncle to many nieces and nephews and had many godchildren. Rico was a caring person who went far and beyond to help others. He will be missed by many. Funeral services were private. Santangelo Funeral Home, 300 Main St., Lodi.